For the recent release of Cinema 4D R23, Maxon commissioned character artist Can Erduman to make a short film highlighting the new character animation tools. The film, L’Artista, is more than entertaining. Erduman also wanted the film’s theme to be something artists all over the world could relate to: “Most artists are never satisfied with their own work,” he explains, “and I don’t think that’s a bad thing, really, because you can’t get better without being unsatisfied with the current state.”

We talked with Erduman, who has been a C4D beta tester since 2012, about the making of L’Artista, his career as a character animator and how he seeks out mentors to help him continue learning and improving his skills. Here’s what he had to say.

Tell us about yourself and how you got into character animation.

Erduman: I knew early on in my career that I wanted to do something with characters, but there wasn’t much work in that industry in Germany in the mid 1990s. We didn’t have the internet either, so I couldn’t find work. I got an apprenticeship as a mechatronics technician instead and, at one point, I was even working on a factory assembly line. I kept learning character animation while I waited for the industry to get established. I’ve been a freelancer since 2007 and, even after all these years, I still feel emotional about the work I do. I enjoy it every day, and I think some of that comes from going through that time when I wasn’t “allowed” to work in my favorite job.

I am self-taught, and I recognized quickly that I was good at animating things. I always communicate that I love what I'm doing, so I got chances to show what I could do in the character field. That's how I came to specialize over time. Being a character artist who uses Cinema 4D has worked quite well for me. There is a lot of demand for characters in C4D right now, but I am always improving my skills.

A while back, I realized I had hit a wall with improving my skills. I wanted to learn more, so I decided to become a trainee at Pixomondo Frankfurt for a year. I quit because I didn't want to specialize in one minor thing, and though I loved the team aspect of the job, I didn’t like being just a small wheel in a big machine.

After that, I tried to hit the next level by joining the iAnimate online school for animation. While there, I got to work with my mentor, Dreamworks Animator, Manuel Aparicio. Manuel worked on Kung Fu Panda 1, 2 and 3 and many other films. Working with him helped me close the holes in my craftmanship and became more advanced. I started to get much better animation jobs after that. 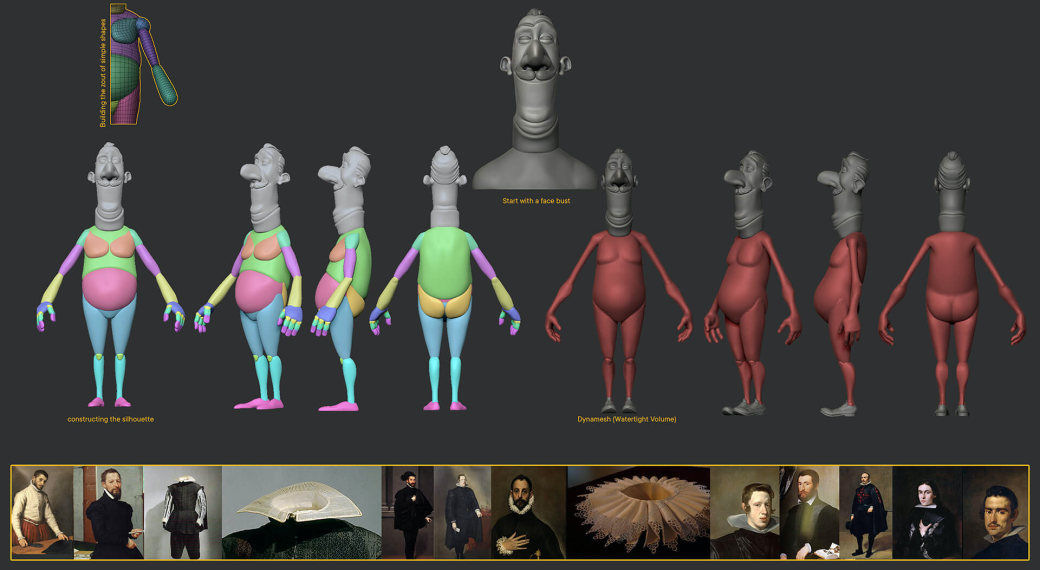 Have you had other mentors?

Erduman: Yes, Shane Olson, a former lead modeler at Disney Interactive. He taught me everything about sculpting. I thought I should know more about that, so I was looking for a mentorship when I found his 3D character animation workshop. I use C4D as my main tool and ZBrush for sculpting, and Shane’s course has helped me so much.

L’Artista is the second film you’ve worked on for Maxon, right?

Erduman: Yes, the first film was called Schism, and it was also made in our office. We were promoting the new fracturing tools in R19. I did the animation for that and Simon Fiedler was the director. We’ve talked about doing other films, but there hasn’t been anything character driven until now. For L’Artista, I came up with the idea to have the artist kind of fight with his art, showing how the sculpture, as a piece of stone, is really inanimate at first. Then, as the geometry is animated with the new rigging tools, it comes alive and bites him.

I worked on this with the members of the freelance collective/co-working office space I belong to. We're called “Büro Feuerwache,” and we've all known each other for years. Once the film was green-lit, I pitched the project to our group, and we decided to tackle it together. The really great thing about our office is that everyone has their own expertise and experience in different fields. With that diversity of know-how, we are really close to operating as a studio while we each remain independent. Also, as long- time friends, we really enjoy working together.

Say more about how you came up with the story?

Erduman: Maxon just wanted to have something really cool, and they loved the story from the get-go. Most times, I am more critical than my clients, so when I am satisfied, they are beyond that point already. I love to tell stories, direct and work out my ideas. I really appreciated that Maxon gave me so much freedom.

As for the story, interest in history is strong in our family. My sister is a curator at the Pergamon Museum in Berlin, one of the most renowned museums in Germany. I love the Renaissance. It marked a point of transformation for Europe, even the world, as we left the Dark Ages behind by rediscovering the knowledge of earlier masters. For the short, I decided to make something that kind of bridged the gap between the old and our modern times. I like how the artist in this feels like he keeps failing, but he keeps powering through. That's super important to learn as an artist.

Walk us through your process for making the characters.

Erduman: I started by creating the design of the characters, which I sculpted in ZBrush. The face was inspired by the French cartoony, comic style. Next, I worked on the body, slowly adding more details until I was satisfied. Retopo and UVs were done in Cinema 4D, leaving me with a low-poly mesh and good UVs. I then reimported the mesh into ZBrush using GoZ.

Next, I subdivided the C4D low-poly mesh so it would have the same poly count as the high-poly mesh. With both in place, I projected the detail from the ZBrush mesh to the C4D mesh. That gave me a mesh that included all of the details, clean UVs and toplogy. My goal was to have a light mesh without the need for a subdivision object in Cinema. Instead, we relied on displacement maps at render time to add detail. I used Substance Painter for texturing the character, and I was particularly happy with how the artist's jacked looked, all the way down to the fabric. I then baked out 4K PBR maps for his skin, gums, torso and legs and was really impressed that Redshift had no problems with the characters, set and props.

And how did you handle the set and props?

The props were really a charm to do. Alex Bootz started out by populating the set with dummies that we bought online to give our short film a really great stage. There was no lighting yet, but we knew what we wanted, and we knew we were up to something fantastic! The problem with stuff that you buy is that it doesn't fit together very easily. 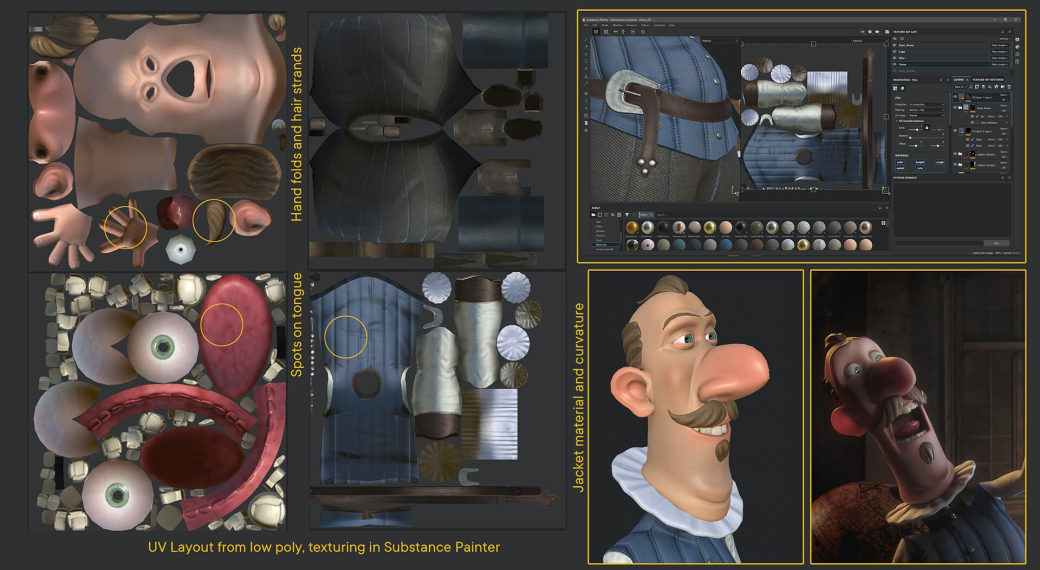 So, once everything was in place and we knew the scale and level of detail to aim for, I went over all of the props and redid the UVs with the new automated UV layout and packing tools in Cinema 4D. The new refined UVs made working in Substance Painter more enjoyable and efficient. With those new UV tools, I was able to re-texture and re-shade the entire set in one evening.

We had about two months to do this, working on and off between other jobs. Three of us worked on the animation process for about three weeks. After we figured out what the short would look like, we worked out ideas as roughly as possible, so we could have a lot of room to work creatively. I made a terrible-looking, stick-figure storyboard to lay out cameras, animation and the length of the short.

Alex had the idea to group the shots into simple camera angles, which really saved a lot of time because we could copy lighting setups and compositing files. Work smarter, not harder! Next, we filmed ourselves acting out most of the animations as a reference. We also made an Excel timetable to plan our approach with milestones. That helped us maintain our animation rate, which was about 50 to 60 final, animated frames per day.

The lighting is beautiful. Talk a bit about that.

Erduman: I am a huge fan of colored, atmospheric lighting. I love orange versus blue lighting moods in movies. Throughout this whole film, our two main light sources were always the cold moonlight and the warm candlelight. Andi Wenzel did a great job combining the dim, moody feeling of the environment and the cartoony lighting with strong rims on the characters.

To maintain control over the final look in comp, we rendered each light group into a separate AOV. That way, Andi could build the final look in Fusion by tuning the color and intensity of each light. Finally, he added some nice bloom and glow effects, floating dust particles and a bit of basic color grading, and we were done.

How do you think R23’s new character tools will be helpful to you?

Erduman: The new rigs are a game changer for me. And they will enable many new artists to join the experienced character artists who are already working in Cinema 4D. We have a lot of demand for character artists and we can't always cover all of the inquiries we get. There are also some workflow improvements that will have a huge impact on productivity. I like that you can lock the attribute manager and filter only animatable components, and the Delta Mush Deformer really improves character weights automatically. Learn more about Maxon’s new character animation tools here.

What else would you like to say that hasn’t been covered yet?

Erduman: I think I really just want to say to other artists, stay with what you love, and you will master it eventually. It’s important to understand that feeling like you're bad at something is the first step to getting better. Also, don't take yourself too seriously.

Flavor explains the animated show package they created with Cutters Studios for the 2020 AICP Post Awards.